How Obama for America used Ethnio for the Presidential Campaign

We are proud to be able to say our little ethnio was of use to those involved in the Obama 2012 Campaign!

It hasn't gone unnoticed that the most recent presidential election showed the difference between the two front-running administrations' ability to connect with their fellow citizens in a way that took advantage of technology at its best. Senior editor at The Atlantic, Alexis Madrigal, described the strategy to reach as many Americans through social media and technology in his article: "they raised hundreds of millions of dollars online, made unprecedented progress in voter targeting, and built everything atop the most stable technical infrastructure of any presidential campaign." He goes onto describe the process in which the highly talented team of engineers prepared for the worst by testing their software repeatedly before election day to ensure there were no bugs that would affect the success of their work in helping their campaign. 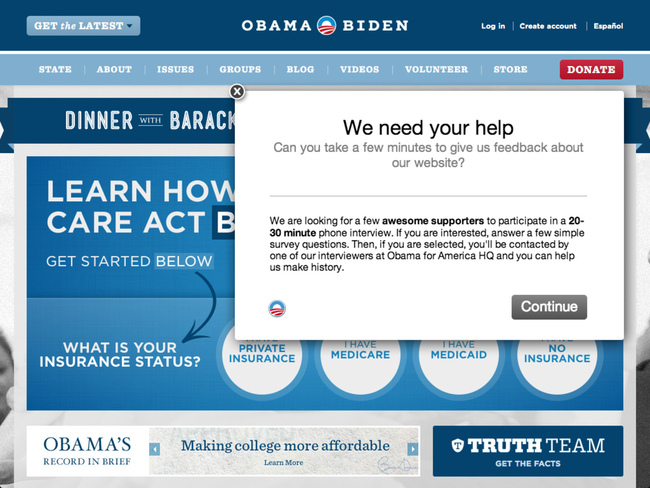 "Ethnio helped us learn in a real-time, cost-effective way how people were engaging with the campaign online. Our target audience was all of America. A cornerstone of our winning strategy was using technology to reach people just learning about the President's platform, engaged supporters, and our most committed volunteers. Obama for America worked with volunteer usability researchers across the country to perform remote usability testing. Running that program wouldn't have been possible without Ethnio."

We applaud every individual that was involved in the success of this campaign on the tech side, and are very excited and glad that we could help with the UX research & design in a small way, for this piece of history that was made. It truly was a display of a strong vision, collaboration, and careful implementation of their strategy on varying levels to achieve their common goal.

If you’ve worked in the non-profit or enterprise software spaces, you know getting vendors approved can take a significant amount of time and documentation. Here are the key steps they took to get Ethnio approved for in-the-moment intercepts.

More from the Blog

We're excited to have a product design position open for an experienced designer looking to work for a growing research SaaS specialized in UX Research interfaces. Do you have a knack for designing user-friendly interfaces that help people work more efficiently? Get in touch!