Taking a Leap into Mobile Intercepts with Ethnio

Our User Research team saw an area ripe for discovery and developed an objective to better understand our mobile users. In particular, we wanted to know how they were using JSTOR on a mobile device and how their mobile activity fit into their larger workflow.

JSTOR is a digital library for the intellectually curious, and provides a platform for discovering and connecting research, images, and primary sources. Our biggest user group on JSTOR is student and faculty researchers, and one of our major goals is to support the academic research process. While most people think of researcher holed up in the stacks of a library, dozens of tabs open on their computer—our data suggested that users were conducting research in a variety of places and on a variety of devices, including mobile and tablet.

Although our analytics showed a stream of mobile traffic, we could not track users across devices and establish an understanding of their overall journey. For example, it was impossible to know whether someone was conducting research on their laptop at home, left to catch the bus to campus, and then started a new JSTOR session on their phone while riding to school.

Understanding the role of mobile use in users’ larger workflows was absolutely crucial to some significant product strategy decisions on the horizon. Internally, we were debating the merits of a separate JSTOR app versus a responsive site. To move forward on that decision, we needed additional qualitative data about the people using their phones to consult JSTOR.

We turned to Ethnio to help us reach this mobile audience. By leveraging Ethnio’s targeting capabilities, we were able to create a mobile-only live intercept. It popped up on users’ phones or tablets, asking them if they had “10 minutes right now?” Participants who answered the screener were contacted for a 10 minute interview within 30 minutes of opting-in. 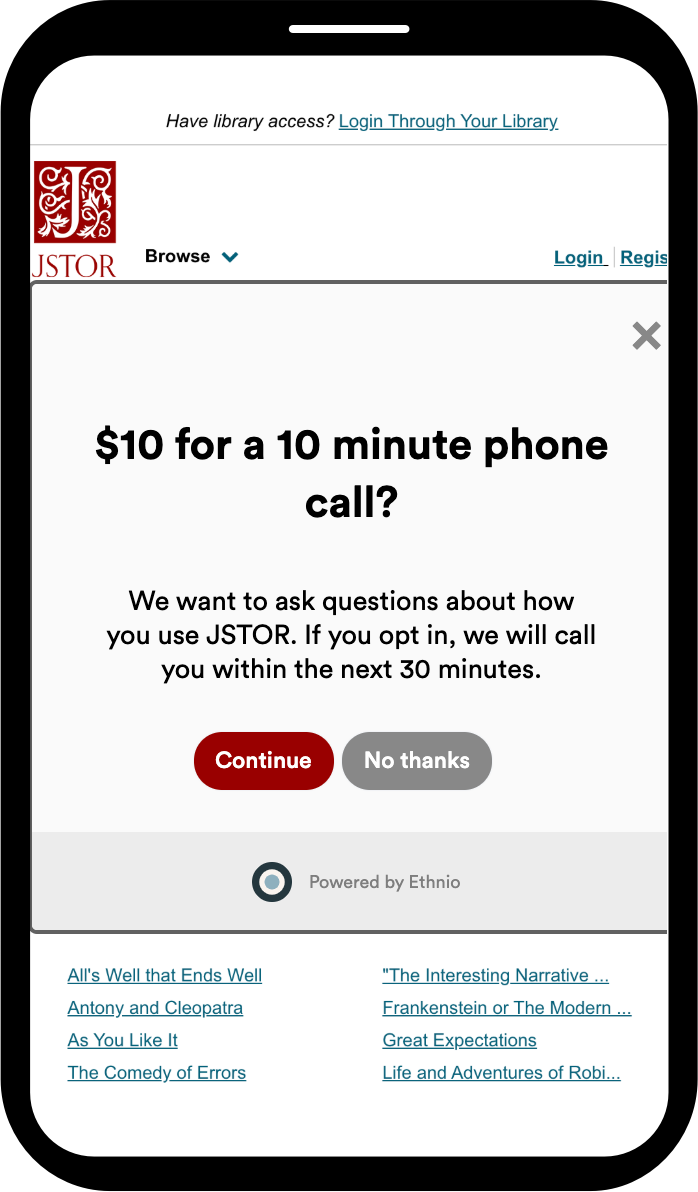 The live component to the intercept, where we spoke to participants within 30 minutes of their initial response, gave us much richer data than other potential methods. Talking to someone in the moment of use is substantially different than asking them how they used our mobile site last week. This approach yielded incredible detail that is typically difficult to unearth from users’ memories when asked to describe their mobile use from days earlier.

During the interviews, we probed participants on where they were currently located and what they were doing and thinking about. We were able to conduct interviews with people who were walking across campus or riding the bus.  We were also able to talk to participants about how they intended to continue their work from this point.

This is where one of the most critical findings emerged: many participants mentioned that they were planning to return to JSTOR later to continue their work on another device.

After this round of research, we made the major decision not to build a JSTOR app. Since we learned that work started on mobile is often continued on desktop and vice versa, we decided to prioritize an interface that works similarly and looks alike across devices. Although we decided not to build an app, we did make a decision to prioritize individual user accounts that could help these users save sources to their account for later and return to them easily.

Our participants tended to focus on consistency as being critical for task completion while navigating from one device to another. It was clear that consistent UI between the mobile and desktop sites was the ideal direction for supporting these multi-device workflows. To make the case for a responsive site with a consistent interface, we created participant profiles, highlighting their research process as well as their preferred device and locations for working.

The below profile shows one of the participant’s workflows: she finds and saves content on her mobile device, prints the content from her computer, and reads the content on paper. The profile also shows a screenshot of the page she was on when she answered our intercept. We were able to identify the exact page because of Ethnio’s pass-through variables, which can provide the URL of the page a respondent was on at the moment of answering the screener. 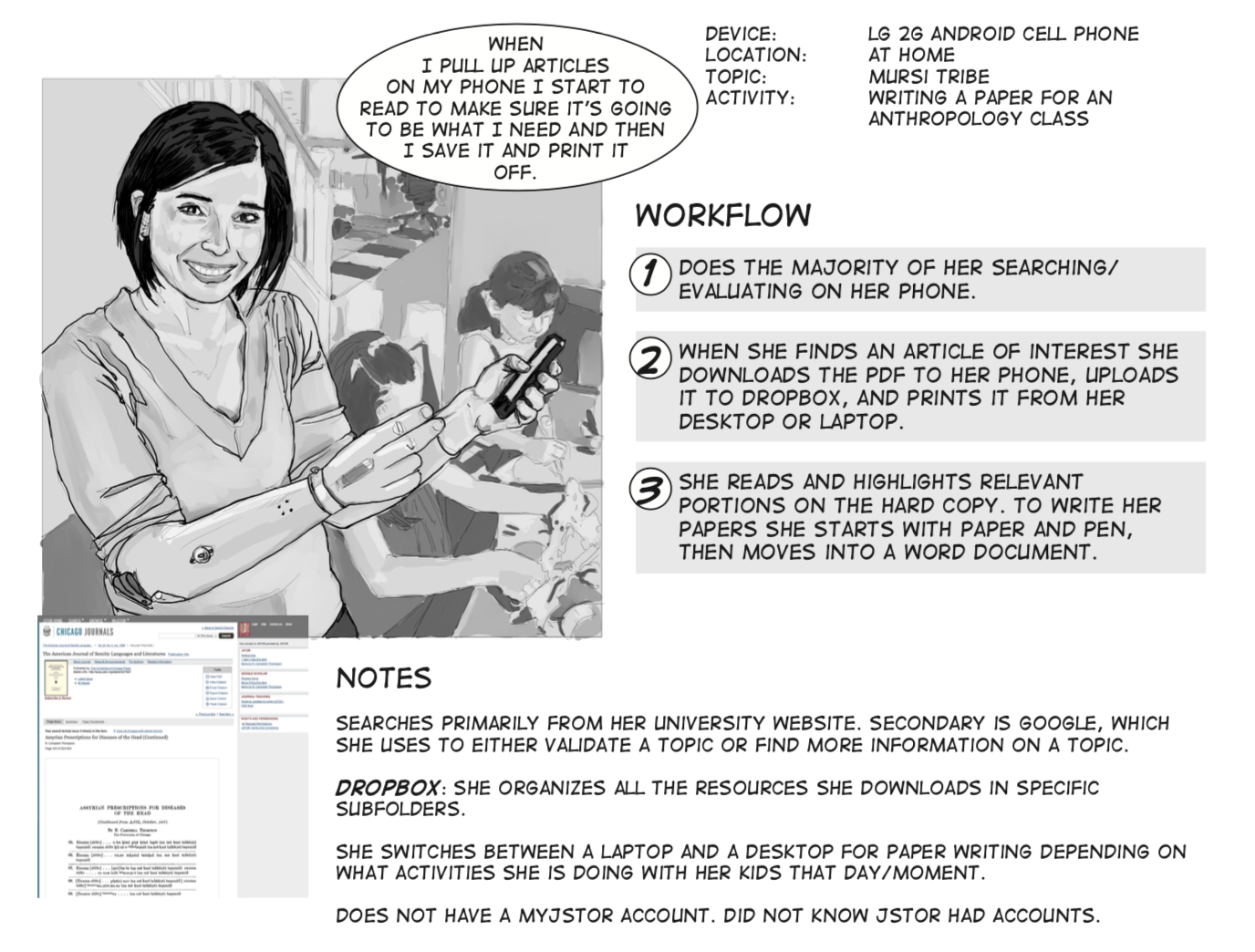 Beyond product decisions, this round of research helped develop and refine our team’s user research practice. Initially, we were nervous to conduct interviews in the moment. The live intercepts forced us to be more nimble. As soon as someone answered the screener, we had to be ready to dive into an interview with an unknown participant and perhaps without the same level of preparation we would have for most research interviews. This fear is understandable, but by rising above it, we were able to master a new method and, of course, gather much richer data situated in a specific context.

This method is now part of our research toolbox. Targeting, pass-through variables, and intercepts are tools that we regularly leveraged using Ethnio, helping us reach our ideal audience at the ideal moment.